Overlooked No More: The Underground Graffiti Adventures of Dondi

White, better known as DONDI, was stylish and shy, but his pieces were forceful visual postcards from the margins of the city. They ranged from quickly written tags to creations that covered whole cars, making him a legend on the streets and in galleries years before “street art” became popular, and setting a standard that is still followed to this day.

He was a master of technique, working for days in his Brooklyn home on designs that he would later spray paint during nighttime forays in train yards and tunnels. And when downtown galleries discovered the medium in the early 1980s, Dondi was among the first aerosol artists to achieve aboveground success. Long after his contemporaries traded train yards for galleries by the mid-1980s, he would still hit a whole car. Later, he produced sketches and collages that were as precise and innovative as his subway graffiti.

And then he was gone. Dondi was 37 when he died, on Oct. 2, 1998, of complications of AIDS. But his reputation as the “style master” endures, with his sketches now going for $100,000 or more, and his canvases for triple that.

“I never had to compromise myself,” he said in the book “Dondi White: Style Master General” (2001) written by his brother, Michael White, and Andrew Witten. “It was always me, doing what was comfortable, and relaying the message that I didn’t have to be taught to be creative and do good things. I guess what I’m saying is that I’m here and I want to be heard. I come from the streets, I painted on subways, and I feel my work is important. I want people to see it — I want to influence others.”

Donald Joseph White was born in Manhattan on April 7, 1961, the youngest of five brothers to Alan Albert White, Jr., an African-American nurse and political campaign worker, and Lucy Mary Espanet, an Italian-American nurse. Nicknamed Dondi as a child, after the popular comic strip of an Italian orphan adopted by an American soldier during World War II, he attended a parochial school in East New York, Brooklyn, and passed the time riding his bike, raising pigeons on the roof of his house and drawing.

His earliest interest in graffiti was practical: he kept an eye out for tags by gangs whenever he ventured beyond his block to make sure he wasn’t entering dangerous turf, like Intermediate School 302.

“You couldn’t go out to Miller Park anymore because of the Tomahawks, which was a black gang,” he said in a 1995 interview that was published in “Dondi White: Style Master General.” “And then there was the Crazy Homicides, a Puerto Rican gang that was over on Pitkin Avenue near 302. They had that area. And across Atlantic Avenue there were the crazy Irish kids called the Headers.”

But along the way, his interest in drawing led him to try his hand at graffiti.

His brother Michael White said Dondi first took to the trains in the mid-1970s with a graffiti crew known as TOP, an acronym for The Odd Partners. Within a few years, he was covering entire cars of trains that traversed miles of tracks, his work commanding notice from southeast Brooklyn to the northernmost reaches of the Bronx.

His style later drew admirers even outside the five boroughs.

He was known for his palette of soft colors and his ability to render his vision quickly and precisely.

“When I looked at something, I would see a line out of place,” he said in 1995. “Whereas other guys, they couldn’t see it, they couldn’t see that their ‘E’ got skinny in that section, that they didn’t think of it in that manner. My whole idea, my thing for style, was keeping the letters consistent, keeping them flowing.” 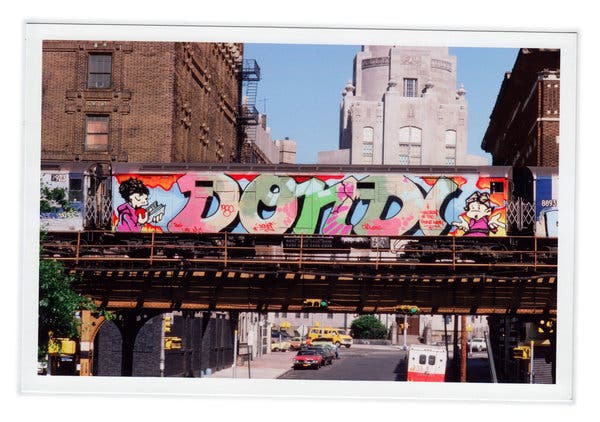 Dondi’s Children of the Grave series, featuring his name emblazoned across an entire subway car, flanked by cartoon figures or an outstretched hand, was among his most memorable work.  Credit…Martha Cooper

His Children of the Grave series — the title taken from a Black Sabbath song — was among his most memorable of his whole-car work. The three pieces were produced between 1978 and 1980, featuring his name emblazoned across the car, flanked by cartoon figures or an outstretched hand and dotted with stylistic flourishes.

“He had a really beautiful, clear concise way of painting,” said John Matos, a graffiti artist known as Crash. “He would stare at it, pull back, do a line and look at it. It was like he was doing math. His paintings looked simple, but they were not.”

Yet no matter how much buzz his pieces generated, they were — like all graffiti — ephemeral. Very often, apart from his sketches, photographs are the only remaining testament.

The most iconic image of Dondi was taken by the photographer Martha Cooper. In it, she captured Dondi, spray can in hand, straddling two subway cars at daybreak inside a Brooklyn train yard. The photo, she said in a recent interview, “captured the intensity of having to paint quickly and illegally.”

It now appears on the commemorative reissue of “Subway Art,” the seminal book Cooper compiled with Henry Chalfant in 1984.

“That photo alone did a lot for the culture,” Cooper said. “It captured an urban adventure.”

Eric Felisbret, a former graffiti artist and friend, said Dondi was generous with his time and advice with younger artists, giving them outlines to follow or touching up details himself.

“He had this whole crew of wannabes,” said Felisbret, the author of “Graffiti New York” (2009). “He was someone who not only had great command over letter forms, he became known for mentoring others. He was a style leader.”

He dressed and acted like a leader, too, said Patti Astor, the platinum-haired artist who gained fame during New York’s 1980s downtown scene.

“Dondi was very understated,” Astor said. “His jean jackets were pressed, he had beautiful shirts. He was very good-looking and very elegant, and that commanded respect. He knew exactly where he was going to go and how he had to play the game to get there, and he was not going to compromise. To make a name for yourself in graffiti is a literal statement, after all.”

Astor gave Dondi his first solo show at Fun Gallery, a venue in the East Village that she ran with Bill Stelling. (The gallery has also exhibited Keith Haring and Jean-Michel Basquiat.)

Dondi took to the gallery scene, with shows elsewhere in New York City and abroad. The timing was right; eventually graffiti began to fade from the public eye as city officials aggressively ordered train cars to be scrubbed before putting them into service.

Two decades after Dondi’s death, street art is commonplace, if not tame, attracting muralists who never did traditional graffiti, much less paint in a train yard. Whole-car advertisements on subway cars are just as common, as the city has sought new ways to generate revenue.

Yet Dondi attained a measure of immortality as a master of ephemeral art. His reputation has only grown, said the artist Sandra Fabara, who starred in the hip-hop cult classic “Wild Style” and is known as Lady Pink.

Powered by WordPress
Send All Photos & Questions to artists@newyorkgraffiti.com